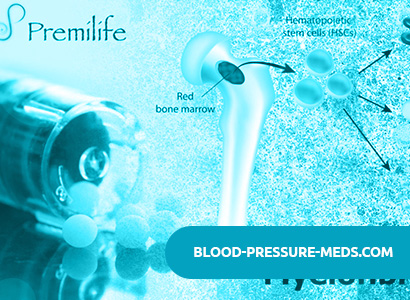 Myelofibrosis (myelofibrosis) is a myeloproliferative disease characterized by anemia of varying severity – from moderate to severe, very diverse changes in peripheral blood, bone marrow fibrosis and myeloid metaplasia of the spleen, liver and other organs. The disease occurs as a result of the proliferation of a mutant clone originating from a stem hemopoietic cell, able to differentiate in the direction of red blood cells, granulocytes and platelets. Often there is also the proliferation of osteoblasts and the formation of new bone tissue. It is not known whether bone marrow fibrosis is a response to violations of the proliferative activity of the cells of the hematopoietic system or a component of such pathological proliferative reactions. Myeloid metaplasia of the spleen, liver and other organs is usually considered as a compensatory process; it is possible, however, that it is the result of stem cell proliferation.

Myelofibrosis can occur against the background of true polycythemia or thrombocythemia, but it usually develops as a primary process. It should again be emphasized that this is a disease of people of middle and old age: the maximum incidence is observed in the age group of 50-70 years. Persons of both sexes get sick equally often.

The disease progresses slowly, and because of the latent onset, the diagnosis is often made when a patient is examined for a completely different reason. Symptoms caused by anemia are often observed: drowsiness, weakness, and shortness of breath on exertion. Sometimes the first manifestations of the disease are symptoms caused by an enlarged spleen, namely abdominal distension, discomfort after eating, heartburn and even swelling in the ankles. Splenomegaly is almost a permanent symptom, in some cases the spleen is slightly enlarged, in others it reaches an enormous size, actually occupying the entire abdominal cavity. Infarction of the spleen is accompanied by acute pain in the left hypochondrium and the noise of friction of the peritoneum. Often detected hepatomegaly. Portal hypertension occurs as a result of thrombosis of the splenic vein, the formation of extramedullary infiltrates of proliferating cells along the portal tract or its increased blood supply. Patients with portal hypertension may experience bleeding, esophageal varicose veins, and ascites.

Often found signs of gout. Patients also suffer from itching, which becomes especially painful in the heat. There are convulsions in the calf muscles, bone pain, and all these symptoms can be very easily attributed to the patient’s age.

Occasional functional disorders of platelets are the cause of intracutaneous hemorrhage and gastrointestinal bleeding. In about 1/3 of patients with myelofibrosis, focal osteosclerosis is found, usually involving the bones of the axial skeleton and the proximal epiphysis of the humeral and femoral bones. Occasionally other parts of the skeleton are affected, such as the skull.

The condition of many patients for many years remains stable with a normal level of hemoglobin and minimal splenomegaly. In some patients, the disease is less benign, characterized by a gradual deterioration of health, progression of anemia and splenomegaly. The average lifespan from the time of diagnosis is 3 years, but many patients live longer. Unfavorable prognostic signs are severe anemia, which cannot be eliminated with blood transfusions, severe leukopenia, spontaneous bleeding, and rapid weight loss. All of these symptoms may be due to folic acid deficiency. The cause of death is most often progressive anemia, approximately 20% of patients die from acute myeloblastic leukemia.

By the time of seeking medical care, anemia is found in 2/3 of all patients. Being mild or moderate in the early stages of the disease, as it progresses, it becomes more severe. Polychromasia, anisocytosis, poikilocytosis are observed, drop-shaped cells appear. In peripheral blood, nucleated erythrocytes and immature granulocytes are often found. Often there is a deficiency of folic acid, caused by insufficient intake of it from food and increased circulation of blood cells. In the case of blood loss, iron deficiency occurs. The number of leukocytes is often increased, they are represented mainly by mature leukocytes, and immature forms are usually found.

The number of platelets may be reduced or increased depending on the stage of the disease. In the early phases, their number can reach 1000 · 109 / l. The morphology of platelets is altered, in the peripheral blood smear there are gigantic forms and fragments of circulating megakaryocytes. As the disease progresses and the spleen increases, the platelet count decreases.

Bone marrow punctures are usually unsuccessful (“dry puncture”), but because of the focal nature of the lesions in myelofibrosis, it is sometimes possible to obtain punctates of the hyperplasia. For accurate diagnosis should be trephine biopsy of the Ilium. Hematopoietic cell activity and degree of bone marrow fibrosis are variable. Using the silver plating method, an increase in the number of reticulin fibers can be detected even in hyperplastic fragments.

The level of uric acid in the blood with myelofibrosis is usually high.

There is no specific treatment. Patients with moderately severe symptoms need only periodic examination. Anemia is the main reason for starting therapy. Folate deficiency is often amenable to treatment with folic acid. Myelofibrosis is one of the few diseases for which prolonged prophylactic administration of folic acid in a dose of 5 mg / day is indicated. You should make sure that the patient is not impaired absorption of vitamin B12. Androgens are prescribed to many patients, but the latter are not always effective, and if they come, improvement is only a few weeks later.

If anemia is so severe that it causes cardiovascular disorders, then it is necessary to transfuse blood, trying to maintain hemoglobin at the level of 90-100 g / l. However, before proceeding with the program of repeated blood transfusions, it is necessary to carefully evaluate the general condition of the patient. After a blood transfusion, the rise in hemoglobin level is often less than expected, and ultimately its growth becomes smaller and shorter in time, and the improvement of the condition lasts only 1-2 weeks. This may be due to the destruction of transfused red blood cells in the spleen.

Blood deposition in the spleen is an important cause of the development of anemia, the degree of deposition must be determined with the help of 51Сг. Mielosan is a very effective means of reducing the size of the spleen – a short course of treatment with this drug leads to a long-term improvement in the patient’s condition.

To reduce the size of the spleen, its irradiation is also used, the results of which are ambiguous. It is not recommended to resort to splenectomy in elderly patients because of the high lethality and numerous complications, as well as due to a possible reactive increase in the platelet count. The embolization method via the intra-arterial catheter is safer.