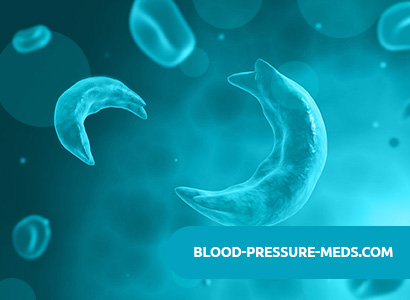 What is Sickle Cell Anemia?

The disease was first described in 1910. Herrick from a black American student from the West Indies. Subsequently, sickle cell anemia was described by other scientists: Washburn (1911), as well as Cook, Meyer (1915).

The sickle phenomenon is a consequence of the decreased solubility of hemoglobin, which gave oxygen. Hemoglobin A, devoid of oxygen, is soluble in half as much as hemoglobin A, saturated with oxygen. The solubility of hemoglobin S with oxygen release decreases 100 times. This leads to gel formation. Microscopy reveals crystals with a size of 1.5 microns, resembling sickle-shaped red blood cells in shape, disappearing after the addition of oxygen.

The clinical picture of the homozygous form of hemoglobinopathy S is composed of moderate normochromic anemia and thrombotic complications. The disease begins to manifest only a few months after birth, since fetal hemoglobin does not contain a pathological P-chain. In addition, a high level of fetal hemoglobin in young children after the appearance of the pathological chain reduces sickle due to increased affinity for oxygen.

The most characteristic symptoms of sickle cell anemia in young children are damage to the osteoarticular system: sharp pain in the joints, swelling of the feet, hands, legs. These changes are associated with thrombosis of the vessels that feed the bones. Aseptic necrosis of the femoral and humerus heads is often observed. Thrombosis often causes pulmonary infarction.

Patients are often tall, thin, with a curved spine; they often have a high tower skull, altered teeth, infantilism, and sometimes signs of eunuchoidism. Abdominal pain can mimic various diseases of the abdominal cavity. A frequent complication of sickle cell anemia is visual impairment associated with a change in the vessels of the retina. Vascular thrombosis leads to the development of arteriovenous anastomoses; on the retina there may be peripheral vascular and fibrous proliferates with areas of black pigmentation. Vitreous hemorrhages and retinal detachment often lead to blindness.

Ulcers are found on the lower legs, especially in sickle cell anemia patients in Jamaica.

Thrombosis of large vessels lead to heart attacks in the kidneys and lungs; thrombosis of cerebral vessels is not uncommon.

The spleen in young children is large, but in the future it decreases, and after 5 years the enlargement of the spleen is rare. This is due to “autosplenectomy” as a result of spleen fibrosis, often affected by heart attacks. Liver with sickle cell anemia is also enlarged.

Patients never know about their illness; their hemoglobin content and well-being are normal. The only symptom in some patients is hematuria associated with minor renal vascular infarction. The content of pathological hemoglobin in the red blood cells of patients with a heterozygous form of hemoglobinopathy is small, and the clinical manifestations of the disease are observed only during hypoxia: in case of severe pneumonia, during anesthesia. Thrombosis at high loads in the mountains, thrombotic complications during scuba diving are described.

It should be noted that thrombosis affects any organs suffering from sickle cell anemia. The sickle shape of red blood cells is detected using a metabisulfite test. With hemoglobin electrophoresis, 2 large fractions are determined – hemoglobin A and hemoglobin S.

Anemia in most cases is relatively small, the hemoglobin content does not fall below 60-80 g / l. The color indicator is not higher than one.

Sometimes, during an exacerbation of the articular or pulmonary process, children develop severe hemolytic crises with the appearance of black urine, a sharp drop in hemoglobin levels, and fever. In the midst of or after infections, so-called aplastic crises sometimes develop with bone marrow destruction of red blood cells and, occasionally, other formed elements. As a rule, reticulocytes disappear, the number of platelets and neutrophils decreases. Aplastic crises with sickle cell anemia often occur immediately in several family members affected by this disease. If remission sets in, then there are more such crises.

never repeated. Often with sickle cell anemia, as well as with microspherocytosis, infection with parvovirus is detected.

In addition to aplastic and hemolytic crises, with sickle cell anemia sequestration crises are described, in which a significant part of red blood cells is temporarily deposited in the internal organs, without being destroyed. This often leads to severe collapse.

Course of the disease

Most sickle cell anemia patients die in early childhood; some of them live to adulthood. Pregnancy worsens the condition of such patients. Maternal mortality in sickle cell aplasia is 6%. Fetal mortality is very high.

sickleness decreases with a decrease in the concentration of hemoglobin in red blood cells. It is recommended that a sufficient amount of liquid be ingested, in a crisis state, it is necessary to introduce a 2-fold diluted isotonic solution of sodium chloride.

The fight against infectious complications is especially important, especially in young children. In connection with pulmonary infections, thrombosis in patients, signs of pulmonary failure are often observed. This leads to hypoxia, which increases sickle formation. Oxygen therapy is recommended, with severe anemia – red blood cell transfusion.

Treatment of a heterozygous state for hemoglobin S in most cases is not required. However, with crises that occur in such patients, treatment is carried out according to the same principles as the treatment of sickle cell anemia.